I’m not a sexist but…

The #MeToo movement has opened up a whole new conversation about women in the arts and entertainment, and central to that is we need to look at the words we’re using, like “strong woman”.

Time to check your language, folks.

Australia is accused of being one of the most racist countries on the planet, The United Nations even weighing-in in December releasing a scathing report warning discrimination is “on the rise”. As a blonde, white woman it’s hard to weigh in too heavily on this, but with a husband who’s a hybrid of Russian and Indonesian parents and a son who is consequentially an unusual cultural mix, I am well aware of the language people do and don’t feel they can use in a politically correct world, I’m also aware of what is downright offensive.

There is an inherent level of casual sexism globally when it comes to conversations about women and female characters. I’m honing in on the double-edged sword of “strong woman” branding.

Am I a “strong woman” because I have a career and a child and speak my mind? Maybe, but what about my kind and patient friend raising her family with the additional challenges of a child with autism, my bold, ambitious friend who travels pockets of the world I’ve never heard of in her leisure time and whose government job is so demanding and classified I know never to ask what she’s working on? We are ALL strong women.

Everytime someone writes that I play ‘strong women’ what theyre implying is that most women arent. How about I just play well written parts?

Jessica Chastain, one of today’s leading feminists in Hollywood has pleaded with the media and the public to stop referring to her characters as “strong” women  saying, “Every time someone writes that I play ‘strong women’ what they’re implying is that most women aren’t. How about I just play well written parts?”. Amen.

Women are strong, every day, not just for the fleeting snapshot of a life put on the stage or the screen. Women don’t have to be powerful to be a “strong” character. In the one-woman-play Mother, Noni Hazlehurst’s character, Christie, is homeless and detached, but her story is “strong” enough to keep your eyes riveted on the stage.

Why do even female writers, interviewers, broadcasters, feel the need to define women as strong or smart as though it’s incongruous with the norm? It perpetuates the antiquated notion of an inferior sex.

Emilia Clarke addressed this wonderfully at the Cannes Film Festival this year. The Game of Thrones and Solo: A Star Wars Story actress was at the festival promoting the latter and became completely fed-up with the term “story woman” being repeatedly regurgitated to describe her character.

“If it’s not strong, what is it? Are you telling me there’s another option, that there’s a weak option?” she said in an interview with Variety . “You think a lead in a movie is going to be a weak woman? It just doesn’t even bear having the conversation, so enough already with the strong women, please.”

Pointing out we don’t hear about male leads being ‘strong’ unless it’s a physical attribute, Clarke is keen to dump the “strong woman” term entirely.

“Unless I’m packing guns I don’t know about, then let’s change that,” Clarke added “Take the ‘strong’ out of it, find another adjective, damn it,” Clarke said. “I’m just playing women.”

While we’re here, can “professional woman” or “career woman” please also get the can? As Australian feminist and author Jane Caro writes in the 2013 collection of essays, Destroying The Joint: “Yes, I’d definitely be a career woman … actually, that’s funny because you would never call a man a “career man. “”.

“Independent woman” can go, too. Are the rest of us kept? Dependent? Less than a man who is described as a “man-child” or “stay-at-home husband” and emasculated if he doesn’t work, but his ability to earn a living never needs to be explicitly pointed out.

But, as Oprah said [in her now famous, 2018 Golden Globe Awards speech]: “A new day is on the horizon”. Our female characters are being increasingly fleshed out on stage and screen.

In 2016, when Jodie Foster was in Australia promoting her directorial offering Money Monster, she told me she always rewrites her female characters, and had to rework Julia Robert’s extensively for the film. The Hollywood veteran had come to expect that women would not be written well, and addressed that herself wherever possible.

We are getting closer to a point where this won’t be necessary thanks, in part, to an increased number of female writers actually penning these scripts. Currently female creatives are embraced and encouraged to generate more content and gender parity in off-camera representation is edging closer. 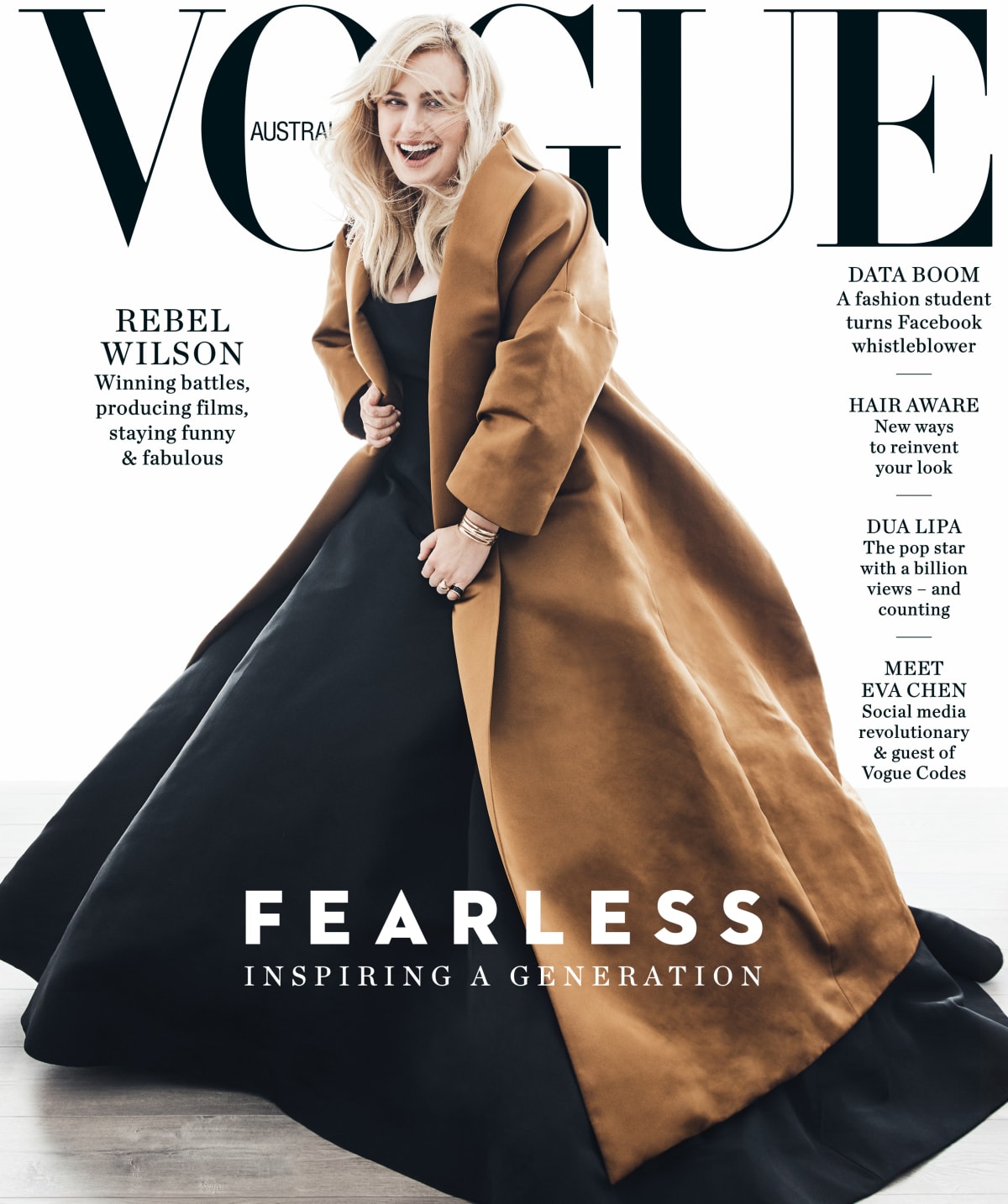 Increasingly too, media outlets are getting it right. The caption of Rebel Wilson’s June Vogue cover story reads “Rebel Wilson is the definition of a modern woman: switched-on, unafraid, and empowered by her self-worth”. They aren’t painting Rebel as an anomaly within her sex because of these “strong” attributes. That’s the crux.

I’m part of several women’s industry groups and forums. One of them recently had a post with a woman questioning herself, and the way a man had responded to a post promoting incentives for female filmmakers. He was angry, and upset that these incentives weren’t being made available to him. It echoes the cries of many men in the industry right now, that they are being disadvantaged because of funds being thrown at female driven projects and content makers. I’m calling this out.

Alleged reverse sexism only becomes an issue when there isn’t transparency. If grant money is advertised for all and then for PR spin they only allocate it to women, then it’s an issue, a big one. If it’s money specifically for women then all it does is strengthen the industry as a whole by boosting the diversity of those kicking goals within it.

Statistically, women aren’t a minority. Census data published in 2017 shows there are only 98.5 men for every 100 women in this country. In 2016 women outnumbered men by nearly 200 thousand. Yet we are still underrepresented by those behind the camera.

To combat this underrepresentation, Create NSW this month announced the #SheDirects incentive, funding $100,000 for female directors to develop Australian television drama projects. It’s part of the broader ‘50:50 by 2020’ project, aimed at achieving parity behind the camera.

Halfway into the five-year target, and the field of directing is dragging the gender parity chain compared to fields like production and writing. Even so, the number of approved projects in New South Wales with female directors has been boosted from 35 per cent to 45 per cent between 2014-15 and 2017-2018. Targeted incentives work.

At the #SheDirects media conference last week acclaimed actor and writer Leah Purcell, who is about to embark on her feature film directorial debut with an adaption of her play The Drover’s Wife, said proudly: “I am a result of initiatives, targets and quotas, ­especially given I didn’t go to any sort of film, writing or acting school. I needed all the help I could get,” she said. “#SheDirects will do the same for others.”

Casual sexism in our language needs to be addressed. Getting  it right in the media helps, but we have to be able to do it for ourselves, and sometimes we’re so conditioned to copping it, we’ve become immune to the impact.

If you’re unsure if something you’re saying is sounding sexist, you can check yourself for unconscious bias. The same way you can test a person for unconscious racial associations using an implicit association test, the test can be adapted – like these from Project Implicit developed with Harvard researchers,  to determine if a person has underlying preconceptions about gendered roles in relation to professions or the arts.

“I’m not a racist but….” is such a classic cop-out line. It’s horrible because it recognises the words to follow are racist, but when it comes to sexist language, often the person speaking doesn’t even realise how sexist they’re being, and we’re complicit by either not picking it up, or not pointing it out. But we should.

Recognising there’s a problem is the first step. This has happened in our media in part thanks to the #MeToo movement , and initiatives like those from Create NSW are huge leaps forward, but there’s a long way to go.

Quashing sexism in our professional and personal spheres is going to take both women and men questioning not just what is being said, but how.

Get the latest from The FIERCE in your inbox

Get the latest from The FIERCE in your inbox.

Get the latest from The FIERCE in your inbox.